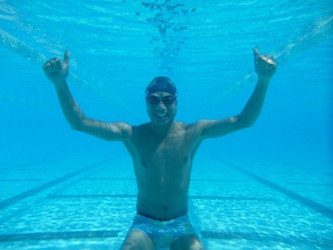 Onesimo has swum on all kinds of teams: back in his native Minnesota, he started on an age-group team, went from there to his high school team, and then swam for his college team, the Division III University of St. Thomas, where he learned the joys of racing the 200 Fly. (Ouch.) In 1996, he moved to NYC to attend the Fashion Institute of Technology, which had no swim team, so he began swimming on a local masters team. He joined TNYA in 1999. Since then, he has added triathlons (from sprint to ironman distances) and diving to his repertoire.

Onesimo started coaching in 1994, teaching kids at the YWCA back home. He’s been a valued coach with TNYA since 2000. He loves to encourage swimmers to get involved in activities beyond our workout schedule, whether by persuading people who have never competed before to try something like the One Hour Swim or a local open-water event or by being a valuable organizer of team social events. In his nonswimming life, Onesimo is a designer of fashion for men and women who spends a lot of his spare time training at the gym, on a bicycle, or running, because he’s kind of an animal that way.