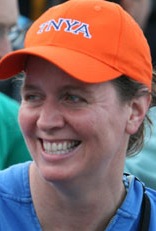 Janet has swum with TNYA since 1996, and began coaching with the team in 2002. She started swimming at age 7 in her local Y summer league, and as teenager swam for a couple of years in a nearby year-round program. When that small team dissolved, she went back to her original summer-league team — not as a swimmer, but as head coach — and spent several summers during high school and college coaching a team of around 50 kids. She was delighted to return to the pool herself in her mid-20s, when she discovered masters swimming.

Janet swam lifetime bests in most events during her mid-to-late 30s, and along the way won several individual and relay events at USMS nationals and even swam on a few masters national- and world-record setting relay teams. In recent years, she has been drawn to open-water events, and has been named a USMS open-water All American several times. Her longest open-water swim was a 20-mile Cape Cod Bay crossing in 2012.

During Janet’s years with TNYA she has also tried playing water polo and springboard diving, and competed at IGLA in both. “My experience as a newcomer to these sports has given me a deep appreciation of the bravery and determination that taking up a new activity as an adult requires,” she says. “As a coach, I relish the opportunity to introduce adult beginners to a sport I love.”