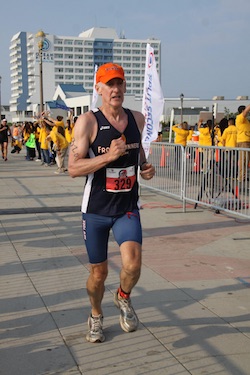 Tom Malcolm is an avid swimmer, but it’s just one of his passions.

Tom had never been a competitive swimmer before joining TNYA in 1997, but within a year or two was regularly competing in meets and open-water races. He also became deeply involved in the administration of the team, serving for many years as a board member, and as the team’s president for four or five years (he can’t remember exactly).

Tom is also a dedicated runner, and has been a member of Front Runners since moving to New York in 1995. He has competed in races at distances from 800 meters to half-marathon. He is also a self-described “casual” triathlete, having completed many sprint triathlons at the Jersey Shore as well as the Olympic-distance New York City Triathlon. “I work the swim and the run, which I’m good at, and fake it on the bike,” he says.

His most enduring passion, however, is horseback riding, which he has been doing on and off since he was 14. He rode at Chelsea Equestrian Center until that closed, Claremont Riding Academy on the Upper West Side until that closed, and the Bergen County (NJ) Equestrian Center until it closed (for renovation). Most recently he rode at a stable in Colts Neck, NJ, where he leased “a big, beautiful black mare named Onyx.”

Tom is also deeply committed to his job as editorial services manager at Parsons Brinckerhoff, an international engineering and construction-management firm. “It’s a privilege to be associated with a company that does such great work,” says Tom, who has written a history of the 129-year-old company and a biography of the firm’s founder, William Barclay Parsons, the chief engineer of the original New York City subway.

Check out the attached picture of Tom competing in a triathlon in his hometown of Long Branch, NJ. Note the divided loyalties: TNYA cap and Front Runners singlet.