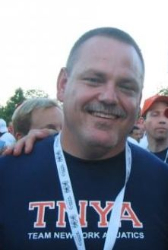 The board is ecstatic (ECSTATIC!) to announce that Todd Cooper is our Teenya of the Month for May 2011.

If we had a title of Teenya of the Century, it would certainly go to Todd. We can’t even begin to describe all of the contributions that Todd makes to Team New York Aquatics, many of them unsolicited and often unthanked, but we will try. Because of his experience as a coach and with TNYA, the board asked Todd to act as our “Senior Coach Advisor”:/about/leadership.html last year, which is a newly created (uncompensated) position, and as such, Todd acts as a general advisor to the coaches committee and as a liaison between the coaches committee and swimmers. The practices that Todd coaches are so popular that we sometimes have had to turn people away. If you have ever worn a One Hour Swim t-shirt, the odds are that Todd designed it. Todd has marched in countless Pride parades with TNYA, attended countless swim meets — scoring TNYA all kinds of points — volunteer bartended at the pier dance, and provided endless warm fuzzies to new and old swimmers alike with his kind smile and Zenlike attitude.

Thank you Todd Cooper! We adore you.