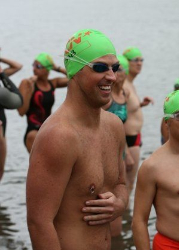 The Board is pleased to announce that we have selected Shane Ewen as the September 2011 Teenya of the Month.

Shane is best known for coaching and managing the “TNYA water polo team”:/polo, serving on the board of IGLA, his central role at the annual Holedrive water polo tournament, and for his organizational contributions at this year’s Stonewall Community Foundation Swim. Shane joined his first TNYA water polo practice less than 24 hours after relocating to NYC from his hometown of Sydney, Australia. He stepped up to the TNYA call of duty in 2009 in response to a coaching and management vacancy on the water polo team. He has now diversified and can occasionally be seen doing double kick sets at swimming workouts. Although Shane will be continuing his trend of “building international aquatic team ties” while traveling for work over the next months (practicing polo with Gay Swim Amsterdam… you gays and your fabulous jetsetting lives), we look forward to his quick return to his home away from home.

Thanks, Shane, for all the valuable contributions you make to TNYA, IGLA, and our community in general. You are truly awesome.