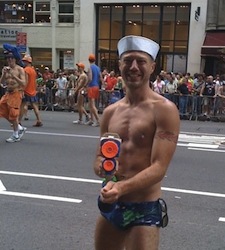 The Board of Directors is delighted to name Scott Kohanowski as our Teenya of the Month. Since he joined our team, he has put in long hours on the board, serving as our president in 2010-11 and leading the team to IGLA Hawaii last year. This year, he even arranged housing in Iceland that ensured many swimmers and divers could make the trip. Has been a strong advocate for diving and has continued to support the diving team as it has built into an integral part of TNYA. While he has left the TNYA board he will continue to work tirelessly for aquatics and our team, because while we were in Iceland he was elected onto the IGLA board: he’ll be a co-chair in 2012-13, leading to the co-presidency in 2013-14. He also is a multiple medalist at IGLA, winning golds in both swimming and diving.

Scott swam and dove as a little kid in rural Alabama, but stopped when he was “knee-high to a grasshopper.” Years later, a miserable cog in a big New York law firm, he saw a bunch of speedo-clad hooligans marching down Fifth Avenue and thought: Here is my chance to get back into the pool and regain some quality of life. He says he showed up at JJC and found TNYA to be an “instant family” — not just a source of motivation to swim, but also a supportive community. He has since worked his way up from the slow lane to lane 2. (And found a much less miserable job.)

Please join us in thanking Scott for all he does.