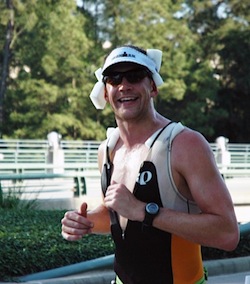 The board is pleased to announce that Ryan Walsh, one of our triathletes, has been chosen as the TNYA of the month. Earlier this month Ryan finished the Ironman Texas triathlon in 12 hours and 49 minutes. An amazing performance for a debut at this distance. As well as training for a triathlon, Ryan has been very involved with TNYA, volunteering for almost every event since he joined the team. He is an enthusiastic doorman, raffle-ticket seller, model, timer, gatekeeper, dancer and choreographer.

Ryan’s earliest memory of swimming is of his first “competitive” neighborhood meet, at age 12. Moments before his event his coach found him sitting behind the blocks in board shorts.

Ryan’s coach dragged him to the table where bathing suits were being sold.That fateful summer afternoon Ryan missed his first swim meet event as he spent an hour being forced to put the suit on….But we all know he has now found his love of lycra!

Ryan joined TNYA in September of 2011 after moving to NYC for graduate school. He just graduated from Columbia University with a Masters of Science in Historic Preservation. These days, when Ryan’s not in the pool, you’ll find him playing soccer with the Ramblers or training for his next triathlon. Ryan’s favorite TNYA moment is the closing party of IGLA in Iceland because it involved a few of his favorite things: great people, great music, and dancing.

Congratulations, Ryan, and thanks for all that you do for the team.