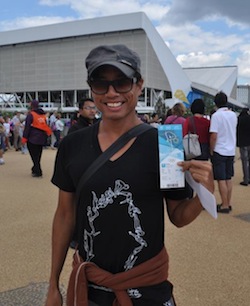 The TNYA Board is happy to announce that Onesimo de Mira is our Teenya of the Month. Onesimo is a team member who does everything: swimming, diving, running, triathlons, coaching, and volunteering. Onesimo moved to New York in 1996 to pursue a fashion design degree at FIT. At that time they did not have a swim team, so the next option was Masters swimming. Onesimo started swimming with Red Tide and moved to TNYA in 1999. That same year, he went to his first IGLA (in Atlanta); he has only missed 2 in the last 13 years.

Onesimo played a lot of sports growing up. He swam with a local age-group team and then later at the University of St. Thomas before moving to FIT. He started swimming open-water events in 1997 and gradually worked his way to triathlons and running with the New York Front Runners. He has competed in marathons and completed two gruelling ironman events. And then he joined the TNYA diving team! At IGLA 2012 in Iceland, he completed a set of 6 required dives as well as achieving a personal best time in the 800 free &emdash at the age of 39!

Onesimo has been a coach since 2000 and also assists at nearly every team social event and fundraiser. He loves being a member of TNYA and says some of his favorite experiences were at IGLA in Iceland, Hawaii and Paris and at swim camp. He works as a fashion designer and has family spread around the world, but he considers himself a New Yorker.

Please join us in thanking Onesimo for everything he has done for the team.