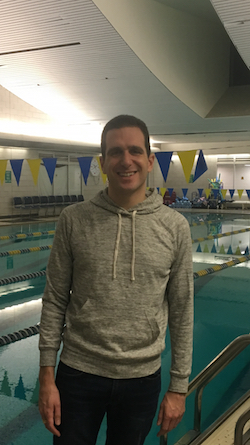 Nathan is part of the crew keeping the 28th annual One Hour Swim running. Herewith, an interview conducted by Danny Rosemarin.

Danny: Hello, Nathan, and thanks for agreeing to be another worthy TNYA in the Spotlight. I know you are anxious to tell us more about the One Hour Swim, which takes place every January, and which you have coordinated for the past two years with TNYA coach/swimmer David Hovey. (Interested parties can read about this year’s event here and sign up here.) Before we discuss that, though, can you tell us more about your swimming history pre-TNYA? Since we come from all corners of the USA and beyond, can you tell us where you are from and how that might have impacted your life as a swimmer?

Nathan: Hi, Danny! I’m grateful to be in the Spotlight, and I will indeed use it to encourage all TNYAs to participate in, donate to, or volunteer at the One Hour Swim (ideally all three!). It’s a great cause, lots of fun, and one of the best things the team does each year.

Many TNYAs may be surprised to learn that I’m not a lifelong swimmer, despite my striking resemblance to Ryan Lochte. I took lessons in kindergarten, in a suburb of Seattle, then tapered for the next 18 years. The next time I swam regularly was after college, when I was living in Jerusalem and working for a newspaper. By chance, my apartment was across the street from a pool, and I rediscovered how much I love to be in the water. I later moved to Tel Aviv, where I got to swim at a beachside pool where they pumped in saltwater from the Mediterranean every morning. Naturally I hardly noticed the difference when I relocated to New York and started swimming at the Y near Columbus Circle. Then I heard about TNYA.

I started reading movie reviews when I was in fourth grade, and I decided that if I had to get a job someday it might as well involve getting paid to watch movies. That eventually led me to my high school newspaper, college newspaper, and work in journalism. My mom’s from New York and my parents always got The New Yorker, so it was exciting when I started working there. If I can’t get paid to watch movies, I’m happy reading our reporting and commentary instead — I love knowing what the writers are working on and seeing its impact. (Another highlight: the time Donald Trump called us “a failing magazine that no one reads.”) It’s true that traditional journalism is struggling financially in a digital world, but subscriptions have surged at The New Yorker and other publications since the election, and many Americans are rediscovering the value of in-depth reporting, especially now that it’s under attack. Beyond the content we produce, my particular job is partly about translating The New Yorker, which is 92 years old, to a world of smartphones and social media. I love helping to figure out how we can maintain our voice and quality while adapting to the times.

Were you educated on the West Coast, or did you come East for that? What brought you to New York, and how long have you been here? Where do you live in NYC, and how do you like the city and your neighborhood?

When I was growing up, people often told me I “seem like an East Coast person,” and I guess I proved them right by moving to the Northeast for college. Every couple months I would come to New York to visit my mom’s family, as well as friends who were in school here. I currently live in Washington Heights, which was my grandparents’ home after they arrived in America and was where my mom grew up. I came to New York primarily for professional reasons, but I love that someone in my family is still in the neighborhood — I feel very attached. I have a tough time with New York’s cold winters and wish there were more pool space, but I’m never bored, and the people-watching is unmatched.

How long have you been with TNYA? How did you find us, and how do you like us?

I joined TNYA almost six years ago, after hearing about it from a friend. Never having been a competitive swimmer, I was nervous, but there were some nice people who welcomed me despite my shyness and lack of swimming skills, and it has been a lot of fun. If you had asked me a few years ago if I would ever voluntarily get up at 5:30 in the morning to swim, I would have said you were crazy, but that’s now what I do twice a week (meaning that I’m the one who’s crazy).

TNYA’s participation in the One Hour Swim has been described as our “finest hour.” Can you tell us more about it, why we do it, and how it works?

The One Hour Swim represents many of the best things about our team. Over the course of two days in January, dozens of TNYAs swim as far as they can in 60 minutes, individually or as part of relays, on behalf of charities that support the LGBT community. Those who don’t swim can count laps, cheer for friends, and (this is important) support their efforts by donating. It’s fun and social and does a lot of good by educating TNYAs and their loved ones about the challenges our community faces and offering a way to help. David and I are hoping every TNYA will participate by swimming, volunteering, or making a donation.

Coordinating the One Hour Swim seems like an enormously challenging yet rewarding task! Thanks for doing it! Can you tell us what it’s like for you to take it on?

For an event that only lasts two days, it’s surprising how much work goes into the One Hour Swim. But David and I are a good team, and we get a lot of support from other TNYAs, which we’re always grateful for. Even on the days when we’re flooded with e-mails and are scrambling to make sure everything is organized, it’s great to know we’re helping members of the LGBT community who aren’t as lucky as we are, people who might be struggling with basic threats to their health, safety, and legal standing. It’s really rewarding to read about and see the work of the organizations we’re supporting and meeting some of those we’ve helped just by getting in the pool and soliciting help from family and friends.

What are some of your loves, hobbies, and passions outside swimming?

In the summer I love to bike and hike, and in the winter my favorite activities are taking naps and complaining about the weather. I also enjoy reading, “Broad City” reruns, and Thai food year-round, and I’m an ardent fan of Enrique Iglesias, except for his music.

Thanks so much for your time and responses. Before we put this piece to bed (do they still use expressions like that? 😉 ), is there anything else you’d like to share with us TNYAs or anyone else who happens upon this Spotlight?

First of all, yes, “putting an article to bed” is still an expression in journalism — it remains on fleek! What I’d like to add is that I love being part of this team, which is such an interesting cross-section of talents, backgrounds, and perspectives. It’s a great introduction to so many people who would never otherwise cross paths. Calling it a swim team doesn’t do justice to the role it plays in so many of our lives.

My final thought, though, is that I hope everyone will be a part of the One Hour Swim this year — here’s my early thank you for all your participation and donations!