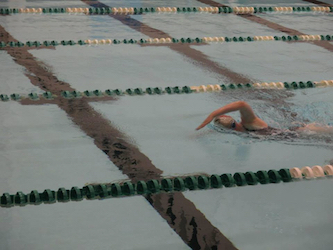 If you don’t know Mollie Marr, it is because she is new to TNYA. Actually, she’s new to swimming in general! I’ll let her tell it herself:

In 2012, I joined Team in Training to compete in the Nation’s Triathlon. My father had Hodgkin’s lymphoma when I was in high school and the chemotherapy for that caused chronic lymphocytic leukemia, which he is still fighting. It was important to me to do something in his honor. Most people who sign up for their first triathlon are good at something, but I was remedial in all three areas. The first day of swim practice the coach said I swam like a windmill and that she couldn’t tell what I was actually doing, but it wasn’t freestyle. Despite this review, I loved every moment in the water.

At the end of the year, the head coach recommended we find a team to continue to train with during the off season. I’m a researcher by nature, so I embarked on the effort to find a team. Many of the sites and teams were quite intimidating, but TNYA was perfect! I mentally checked off the list: “Feel comfortable swimming 25 yards of freestyle” (check! Thank you, triathlon) and “An awareness of the existence of the other three competitive strokes—backstroke, breast stroke, and butterfly—is helpful” (that’s me! I know other strokes exist!).

I started attending the Low Pressure Zone in October 2013, and since that time, I’ve learned all four strokes. Obviously, I’m better at some than others! I’ve also learned things you never have to worry about in open water, like flip turns and diving off blocks. I even competed in my first meet a few weeks ago. I love swimming and I’m really thankful and excited to be a part of the team.

We’re glad to have you, Mollie. And please note: the “first meet” Mollie mentioned was the Gay Games in Cleveland. Way to go BIG, girl. And we’re not the only ones who think so: Check out some of the press she got — and don’t stop after Mollie’s part. If you read on, you’ll see another familiar face!