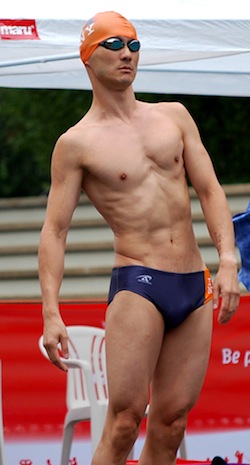 The TNYA Board is happy to announce that Kent Lau is our Teenya of the Month. Kent has previously served on the TNYA board and has organised and volunteered at multiple TNYA events including Aquapalooza I and II, team boat cruises and whitewater rafting trips, holiday parties, fundraisers, Jock-A-Thon mixers, and Pride marches. Kent also organizes multiple relays for the annual one hour swim.

Kent joined TNYA in 2002, as a novice swimmer in the cocktail lane and says he couldn’t finish workouts because of hypothermia or cramps or both. After 3 months, he dropped out but a few months later, he rejoined and signed up for every one of Sue Murray‘s TNYA stroke clinics. Two years later, coach Onesimo De Mira encouraged him to start competing. At his first meet, the Metro Championships, he was hooked when TNYA head coach at the time, Conrad Johnson, handed him a bronze medal in the 200 free relay. Since then, Kent has competed in almost 30 meets, including 2 Gay Games (Chicago and Cologne) and 3 IGLAs (Paris, DC, Iceland). In 2010, Kent dove with TNYA for 3 months. He won his first IGLA medal in Iceland in the 200M breaststroke with a PR by 9 seconds. Kent says Iceland was definitely one of his TNYA highlights.

Away from the pool, he volunteers at Marriage Equality NY, the Ali Forney Center, and the Trevor Project. In 2013, Kent will be going into his 12th year volunteering with Broadway Cares Equity Fights AIDS. Professionally, Kent has over 20 years of design experience working in art direction.

Please join us in thanking Kent for all that he has done for TNYA.