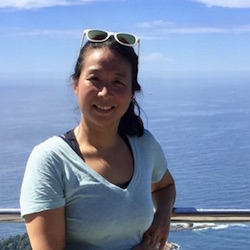 Herewith, an interview with Jess, a swimmer and synchronista, by Danny Rosemarin.

Danny: Hello, Jess, and thanks for being the next subject of the TNYA Spotlight! I always like to start off by asking our teammate how and when she got started with TNYA. How did you find out about us, and what inspired you to join?

Jess: Of course! I heard about TNYA when I googled Masters swimming in Brooklyn. This was in 2010. I had just moved to New York City. I swam in high school and for a hot second in college, but it had been four or five years. I knew it was time because I started to sorta ache for it. (Who knew you could be in pain from NOT swimming!) And also I wanted to meet cool people.

I definitely relate! Not about the swimming in high school part (I wish!), but about friends and belonging. In what events and activities and opportunities have you participated with TNYA, and what has that been like for you? Have you had any favorites?

I like the dorkier side of life. I went to a recent board game night and had a blast. I remember there was a trivia night a few years back — I was terrible. Don’t ever count on me for trivia. That said, I had a lot of fun.

I’ve also gone to a few of the meets. I went to IGLA Stockholm. I did the One Hour Swim one year, but pushed myself too hard. (A few people on the team know the disaster that followed.) I went to Swim Camp one year too, where I also pushed myself too hard and have been too afraid to go back to. I’ve gone to the Lake George Open Water swim a few years in a row. Maybe it’s because I don’t push myself too hard. But I like to think it’s because I get to meet new TNYA people, the Adirondacks is gorgeous, and I’ve been learning to like open water swimming. I hope more TNYA people go this year.

Swim Camp requires the right balance of pushing yourself while at the same time listening to your body, as I’ve learned. I love the Lake George Open Water Swim, and once around is plenty for me! Where do you do most of your workouts and what benefits have they brought your way?

I mostly swim at LIU, and I have to say so much of my sense of community. I’ve been going to synchro practice at Baruch too. I started swimming and practicing ballet when I was 4. And by age 12, there wasn’t enough time to do both, and I had to pick one. (I still miss dance, and so Matt Gurry and I have been going to the Joffrey, which is only to say that it’s never too late.) And now, trying synchro for the last few months has been my chance to bridge swimming with ballet. And even if you don’t like to dance, you should still come. It is hard — I’ve spent so many years thinking about how to position my body so I can swim forward, but now I have to think about sometimes going feet first or sinking (on purpose!). That said, there’s not a single synchro practice where we don’t smile and laugh and feel proud of how much we’ve learned. It’s worth all the aches and pains.

I’ve noticed the love our Synchro members have for their team, and now I understand better why! You work for NPR. What kind of work you do there? How did you get started?

I’m a producer on a podcast called Rough Translation at NPR. We tell character-driven stories in which people elsewhere around the world are facing challenges and having conversations about the things we talk about here in the US.

I got into radio in some ways by accident. A friend and I started a podcast when we were in college. I used to record interviews with my friends on these long car rides and we’d air that on our local station. And also put it out for the world to hear. We had a weirdly avid fanbase in Germany. When I graduated from college, the financial crisis really hit. But because I had majored in economics and had experience making radio, I landed at NPR’s Planet Money. And I’ve hung on every since. I’ve always enjoyed interviewing people — a microphone gives me license to be nosy, and I love it. I like voicing less, but I’m getting used to it. [Editor’s note: Jess’s team won an Emmy in 2014 for the documentary series “Planet Money Makes a T-Shirt,” which followed the making of a simple cotton T-shirt through the global economy. It’s well worth your time.]

Where are you from originally, and where do you live now?

I was born and raised on Long Island (Three Village Swim Club dolphin!) and now live in Brooklyn (still LI). By some measures, there are some sloths who have probably moved farther than me — like you know how in physics velocity is only measured by the change in position and not distance traveled. (I just calculated that my velocity is something like 9.6 x 10^(-5) m/s, which is to say very very slow. Like I said, dork.) But I’m not as provincial as my starting point and current point indicates.

I’m told you’re into surfing — can you tell us about it?

I started surfing in the Rockaways with a few fellow swimmers — Richard Peterson, Cara McAteer, Pauline Shu, MJ Constant, and John Thomas. We were hooked in the summer, but Cara and Richard convinced me to continue through the winter. And last year for my birthday I surfed when it was snowing. What a way to see NYC.

I’ll bet! Thanks so much for your time. In closing, can you give any pointers to those who have recently joined our team or are thinking about joining? Or any other parting thoughts?

Before practice, drink water. And eat something, but not too much. During practice, say hi to people. We’re friendly. After practice, stretch. And drink more water. Repeat.