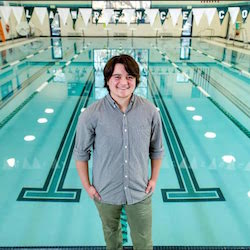 Jay is the beloved clinics coach of our Saturday afternoon Low-Pressure Zone workouts. Herewith, an interview conducted by Danny Rosemarin.

To start, can you tell us about your life outside of being a swimmer? Where you are from, Where you live now, your education/career? Some of your other interests and passions?

I’m from a small suburb in New Jersey originally, and I graduated from Sarah Lawrence College a couple years ago, which was a great experience for me. It was a very progressive and open-minded school, so it really allowed me to fully explore and develop my biggest passions academically, like learning about different cultures and religions, and how people are affected by varying life experiences and social justice issues. Now I live in Crown Heights. I’ve been working at Callen-Lorde Community Health Center, an LGBTQ+ health clinic, for about a year as a patient care associate specializing in mental health. I’m excited to be starting a new position as a case manager, next week, actually. My goals right now are to teach English abroad in a Spanish-speaking country in a year or so. I love traveling and want to learn Spanish so hopefully it’ll happen. Then eventually pursue graduate school for clinical psychology; we will see! My other interests? Besides swimming, I dabble in and really enjoy rock climbing, yoga, and weightlifting. I love a good book, board games, and watching the Daily Show with Trevor Noah.

I’ve loved swimming and being underwater since being a kid. My mom likes to tell stories from when I was 2 and she’d take us to the public pool. As soon as she let go of me I’d throw myself at the bottom of the baby pool and come up coughing and choking. It’d totally freak my mom out, but when I was done coughing I’d crack up laughing because I was having so much fun. So naturally my parents signed me up for swim lessons. When I was 6, I joined my town’s summer swim league at the lake around the corner, and I’ve been on swim teams ever since. Initially I remember it being scary and gross to train in a lake, but as I got older I fell in love with exploring underwater; my claim to fame was being able to find anything at the bottom of the lake that somebody had dropped. While practices and meets could be tough, I had a blast reaching milestones and having fun with my teammates.

Can you tell us about your swimming experiences later on in school or college? What were some of the positives and negatives for you, as an individual and as a member of the LGBTQ+ community?

While I never experienced overt homophobia or transphobia targeted at me specifically in high school, my high school was pretty cookie-cutter. There was a mix of support and prejudice from staff and students towards the LGBTQ+ community; a rainbow flag that I helped hang up with the Gay-Straight Alliance was torn down the next morning by a group of students. Because of this general culture, I was pretty reserved on my high school swim team. I didn’t really feel like I fit in or had much in common with most of my teammates. On few occasions (though with much trepidation) I mentioned that I was attracted to women, but I definitely was too terrified though to talk about my questioning of my gender identity. Despite not enjoying the team socially, I loved the workouts. They were a huge form of self-care for me in battling my depression, which revolved around my sexuality and gender identity. My college swim team was a big contrast. Rather than being afraid that people would find out, my coaches and teammates accepted me from the beginning. They called me “Jay” and used “he,” usually without me even having to ask them. They were all quirky, wonderful people and became some of my best friends. I was a team captain for three years. My senior year I actually swam on the men’s team when I started testosterone, which made me the first publicly known trans person in the NCAA to swim on their preferred team. There was no question to me that I would get full support from my coaches, teammates, and the rest of the sports center because they all knew me as a guy anyways. Our practices were mixed genders, and meets alternated between men’s events and women’s events, so the only difference was that I raced against guys and was on relays with my male teammates. I was less competitive than I was swimming against women, and I was a bit nervous about it at first, but being able to have my gender validated was totally worth it. It was a pretty special experience.

How did you find TNYA and how do you feel about the team and your involvement in it? What, if any challenges does being a member/coach present for you?

I had a friend who mentioned she stumbled online upon an LGBTQ+ swim team in the city, and I had always kept it in the back of my head to look into it. The summer before my senior year of college, in 2014, I wanted to make sure I stayed in shape for my last year of college swimming. I knew a team environment would be more motivating than swimming on my own. It was also the summer that I started T, so being able to swim somewhere more inclusive was important to me. I remembered the team and found it on Google, so I gave it a shot! I swam on the team that summer, stopped to swim my college season, and then after I graduated I started coaching as a sub and eventually got a regular spot as a coach for LPZ’s technique clinic. I feel proud to be a part of a group where my community can intersect with one of my greatest passions in life. Especially being a coach has been very rewarding. I love making new swimmers feel welcome, and seeing swimmers progress in the water after my feedback. I’ve met some very nice people through the team.

My biggest challenge as a coach is trying to find the balance between teaching new skills and over-challenging swimmers when there can be such a diversity of experiences in the water. It usually works out, but I feel bad when there’s a swimmer who looks like they’re not getting as much out of it, or when I can’t give them the full attention I would ideally have the time to do. My biggest challenge as a swimmer is perpetually feeling like I’m out of shape! 😛 I’ve been getting better though at adjusting my expectations for myself from a college swimmer to a Masters swimmer.

As a Masters swimmer and coach, what advice might you give to a new swimmer and/or a new coach?

For new swimmers, I’d say don’t worry about being “fast enough.” The really cool thing about TNYA is that there is such a diversity of swimming abilities — from people learning basic freestyle to former NCAA Division I athletes. There’s a place for everyone; you can get whatever you want out of it.

While we understand that you can not speak for an entire segment of the LGBTQ+ community, what recommendations might you make for making TNYA a more inclusive team?

I think the team has a ways to improve on in terms of having a more inclusive culture for trans and gender non-conforming swimmers. What I think is important to understand is that often times the “T” can merely be tagged at the end of “LGB” when in reality being trans has nothing to do with sexuality. That means being gay or bi or what have you by no means guarantees you understand the unique challenges of being trans. Unfortunately there are “LGBT” spaces where cisgender LGB folks can actually be transphobic, intentionally or unintentionally, just because of plain ignorance. From that perspective, I think it’s really important to be intentional and explicit on our stance to respect trans people. One basic way would be for coaches to introduce themselves with their pronouns, and invite new swimmers to share theirs. Even if you’re not trans, being exposed to that kind of language can be a big step in educating you that you can’t assume someone’s pronouns just by looking at them, and how important it is to respect someone’s pronouns. And for people who are trans, having the onus of educating others on your experience lifted from you, and to instead have others who have already proved their dedication to respect you share it with you, sends a big message of support and inclusion. It certainly would have made me much more comfortable my first day on the pool deck.

Lastly, is there anything else you would like to include here?

Just thank you again for this opportunity! It’s an honor being apart of this team as a swimmer and coach.