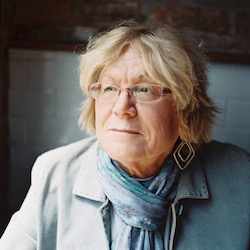  Continuing with our TNYA Member Spotlights, I interviewed our highly accomplished and amiable veteran member, Dr. Helen Lemay. The following is an edited version of her responses to my questions. Thanks, Helen for your thoughtfulness and openness here. In making some editing choices I kept some statements that reflect Helen’s glib and mildly self­deprecating style of expression, although I might not be in complete agreement with how she characterizes herself. There is no one else quite like Helen on the team, and we are honored to have her!

When did you join the team and why?

I joined the team over 25 years ago. I was living and teaching in Suffolk County, and my daughter’s swim team started a Masters branch. This was about 32 years ago. After a few years, when the Masters team was discontinued, I decided to see what was going on in NYC.

This corresponded roughly with the end of my first lesbian relationship. Up until then I had been exclusively heterosexual, and by this point in my life I had changed. So I went to my first TNYA practice both for social reasons and for swimming. I immediately realized that I was not going to find the love of my life in a group of young, gay guys, but that was OK; I really wanted to swim.

Paul Fortoul’s (deceased, missed by TNYA, our fellowships are in his name and honor) coaching was so great that I traveled to NYC from the Stony Brook area twice a week for years — Friday nights and Sunday mornings — to go to his practices. At that point, I did a third workout on my own at Stony Brook. I was swimming for the love of the sport — something I had been deprived of, growing up in a poor single­-parent household, where my mother supported two kids by working in a factory making baby hats. There was no money to join the YMCA, and my public high school at that time did not have any girls’ teams. I was a cheerleader for the boys’ teams.

My college experience took place before Doc Counsilman revolutionized the sport. So, for a year I swam backstroke on the Junior Varsity in a women’s college, wearing nose clips. There was no such thing as swim goggles. We put oil in our eyes to protect against the chlorine. I also did a year of synchro.

After making my daughter a swimmer, at last I could swim. Paul’s workouts were a central part of my life.

In what ways have you participated in and contributed to the team, team events, functions, fundraisers, meets, administration, etc.?

When I first joined the team, I was unable to go to the out-of-town meets. Everyone was preparing for Vancouver, and this was simply out of the question for me financially as well as practically. I was living with a child, two dogs, and three cats, and I had a very demanding job. I swam at meets at City College, Fordham, and Nassau County. At our local meets, I timed, and counted distance events. By this time we had moved past the pink and blue cards used at age-­group meets, and now computers had entered the sport. I worked the computer for the entire Stonewall meet that we ran for many days at Asphalt Green in 1994, staying in NYC at my ex­-husband’s apartment. Later on, when I was in a better financial position, I went to the meets in Paris and Iceland. When I owned a car, I drove stuff to a Flushing meet; I drove swimmers to the airport for our Paris flight; I drove an elderly lady to the Paul Fortoul memorial.

Although I was asked to run for the board in the beginning, I was unable to accept, since I lived hours away, and board meetings were held on week­nights. I swam in many of our fundraising One Hour Swims, and now I contribute to the swims of the first few people who post on Facebook. I have attended multiple fundraisers in bars, and have been to many team parties and dinners. I have tried to give where I could. For example, all of my daughter’s old swim trophies were relabeled “TNYA” and awarded at past team dinners.

What have been your goals as a swimmer, and what challenges have you faced and/or overcome to meet them?

When I was training with the Stony Brook team, I learned the basics of strokes, turns, starts, etc., and worked on improving my times. I had the same goal for my first period on the team, which lasted until I was 53. At that point, I suffered a rotator cuff injury, and tried to rehab for the Stonewall 1994 meet. I was only able to get through 50s freestyle, so I swam that event as well as relays. After the meet, I had shoulder surgery, believing it would make me able to return to workouts. I was out for nine years after that. One summer, it seemed as if I might be able to return to the team, so I went to a practice at City College on a Sunday morning. After nine years, Paul recognized me immediately, and greeted me by name. (I have no doubt that he also had all my former times in his head.) Slowly, with the help of Michael Ing (a physical therapist who used to coach TNYA). I returned to regular practices. Over the years, with the decline of age and some illnesses, I had to accept that I needed fins to get through a practice.

My biggest challenge is aging. My shoulder has declined; my knee has declined; my entire body has declined. I used to go first in the slow lane; now I try not to face the day when I will be too slow for the workouts. Swimming with TNYA is a very important part of my life.

What personal challenges have you faced, and how has being with TNYA supported you in those challenges?

At age 75, I have faced a long list of personal challenges, as I imagine most people have. From my present perspective, the largest challenge is dealing with loss.

My major life satisfaction has been my daughter. I loved raising a child; it was something I did enthusiastically, probably too enthusiastically. Many of my years were filled with Michelle and with work, and I found them greatly fulfilling. Fortunately, she has grown into a loving adult, and is happy and healthy. However, many parents see a child’s adulthood as a partial loss — a loss we know we should be thankful for, but a deprivation of the intimacy that begins at birth. I am very grateful to have experienced the years of her childhood, and I can’t be sorry they are gone, because she is a fine human being.

I have had a very satisfying career. I was lucky enough to get a job as a professor at Stony Brook University, and to move up the academic ranks. Although I devoted a great deal of effort to teaching, and was rewarded for it by being named Distinguished Teaching Professor, I also continued my research. When my research project did not work out, I obtained an adjunct position at another university, which kept me partially “sane” for a couple of years. This and a lot of prescription drugs keep me going.

So, although I have good friends, the basic anchors of my life have disappeared. In this situation, TNYA has been a very important element. I love swimming with the team, and, at least for now, I am still able to do so.

How do you feel about the team and its members overall, and what advice would you give to new or returning swimmers that has worked for you?

Going to practice for me is a real pleasure. I get to see people I like and have known for many years, and I also meet new members. Because of my schedule, I have recently started to swim in the LPZ, and I find my lane­ mates welcoming and congenial. I can’t really give them advice; when I came to TNYA eons ago, I already had skills they are now learning to develop. However, I am grateful to them for tolerating an old, slow woman in their midst.

I enjoy greatly team social occasions; however, I don’t go to late-­night bar events. I am indeed an old woman, unable to go gallivanting at all hours, and not really suitable for gay bars. I enjoy keeping up with members on Facebook; this gives me insight into their lives, which interest me greatly.

I would simply like to reiterate how grateful I am to be a part of this team. It is a true anchor in my life, a place of wonderful people and excellent training.