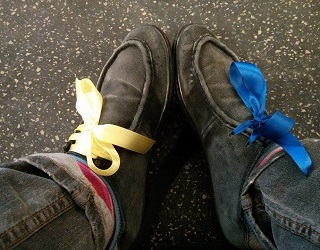 Team announcer Lisa Gilson recently sat down with Eugene Skorodinsky to interview him for a TNYA Spotlight edition. They met at a Ukrainian (not Russian) bar in the East Village following a Baruch practice. Wrapped in a traditional Ukrainian (not Russian) babushka and her red leather mini skirt, Lisa squinted her way through the dark bar and found Eugene drinking Ukrainian vodka straight from the bottle.

LG: Eugene, I’m here to set the record straight about a number of rumors that we’ve been hearing about you.

ES: Don’t believe anything the KGB says. That’s for Russians, not Ukrainians.

LG: Actually, I was just talking about the report that you are the luckiest guy on TNYA.

ES: Well, I did win the green card lottery, enabling me to come over from Ukraine. You know I’m Ukrainian, right? Then I won the housing lottery, and got to purchase my swinging Brooklyn bachelor pad.

LG: So what’s next, striking it rich in Powerball?

ES: No, I am too resistant to play Powerball. I contend that I am too good at math for that. In fact, I become smug and downright unbearable when people talk of lottery pools or otherwise encourage me to play.

LG: Let the record show that Eugene did deliver this line rather smugly. Now, back to that housing lottery-I heard you live by the beach.

ES: I do, but despite living a 10 minute walk from the beach, I prefer to spend an hour or more one way to get to TNYA practices. This is not only to get the guidance of a coach and of the black line, but to avoid the “cat piss in your mouth” taste of “salt” “water” [using the last two words loosely].

LG: Does it remind you too much of the water back home?

ES: No. I hear water in Russia tastes like cat piss. Ukrainian water tastes like freedom and dignity and universal human values.

LG: You know what else tastes like cat piss? This Ukrainian vodka. So, how long have you been on the team?

ES: Oh, it’s been a while, maybe 13-15 years. In fact, I was on the Board of Directors for 4 years, serving as Treasurer for all four. Somehow, the team did not go bankrupt during that time. Go figure. [Orders another bottle of vodka in his native language, Ukrainian.]

LG: What else do you do for the team?

ES: I’ve been gatekeeping for a while, so if anybody needs the name of anybody else, I am your yenta. I suck as a yenta though, and I need them to have come in at least three times lately in order to maybe possibly remember their name. So there.

LG: Let the record state that the word yenta is actually Yiddish. [Lisa rolls her eyes and notices something near the ground.] Hey, what’s with the shoelaces?

ES: Yellow and blue are Ukrainian flag colors. I’ve been wearing these shoes like that since soon after the [expletive deleted] with Russia started over a year ago.

LG: Anything else you want the team to know?

ES: If anybody wants to send me cake to congratulate me on being TNYA of the Month, they can get my address from the return address of the gatekeeper envelopes.

[ES drops the empty bottles of Ukrainian vodka to the floor and the two leave the bar.]