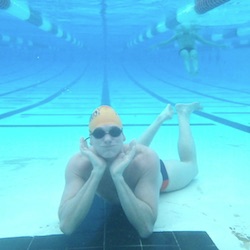 Eric’s swim career started like many TNYA members: he was thrown into the deep end as a kid and managed to make it to the other side. This led to mile-swim badges at Boy Scout summer camp every year, swimming back and forth across a muddy Oklahoma lake. He was also into both windsurfing and sailing as a kid (Oklahoma, where the wind comes sweeping down the plain!) But he was most passionate about scuba diving, getting certified at age 13 and diving every chance he could get. He and his partner, Christopher, joined the Village Dive Club (an LGBT scuba club) shortly after moving to New York, and they have gone on some amazing trips, diving all over the Caribbean, Fiji, Bali, Hawaii, Palau, Truk, and Yap. Now, he’s the president and organizer of the club.

After spending so much time either in a boat or scuba diving beneath the surface, TNYA was the next logical step. Recruited by C.A. Hutton at a Big Apple Ranch fundraiser, Eric joined the team in 2013, attended swim camp, and is plotting his competitive debut at IGLA in 2015.

When not swimming with TNYA or scuba diving, he’s not slacking. Eric is an attorney at Time Warner (but don’t come to him with your cable complaints — his duties fall to HBO, Warner Bros. and TBS). He trains at Equinox, and enjoys reading, travel, Fire Island, and lately, board games and cosplay at renaissance fairs and sci-fi/fantasy conventions.

Want more Eric? Check out this Next Magazine profile.