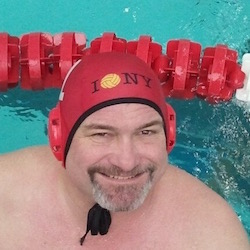 Chris is a swimmer and polo player who joined our team in 1990. Herewith, an interview conducted by Danny Rosemarin.

Danny:Hello, Chris, and thanks for being the next focus of our TNYA Spotlights. I remember we got to know each at Chicago 2006 Gay Games. We both participated in the Pink Flamingo, masterminded by Charlie Carson. We played “widows of 9/11” determined to see Ann Coulter (admirably played by Swann Smith) where she belonged: in the swimming pool and underwater. TNYA won 1st prize for that farce! Can you tell us about some of your memories of that experience, as well as other memorable moments from Chicago 2006?

Chris: One thing I remember most about Chicago was that it was terribly, terribly hot. The complex with the water polo pool didn’t have any A/C, so it was brutal, but not as brutal as for the basketball players who were in the same complex and had no A/C in their gym. Marching in the opening ceremony in Soldier Field and the closing ceremony in Wrigley Field was amazing. Taking part in the Pink Flamingo is always fun, as one has to “flame” every once in awhile. The different Pink Flamingo performances tend to blur together after a while, though it is always amazing how nervous I get worrying I will miss my cue or mess up somehow.

Where are you from originally and what brought you to the Big Apple and Staten Island?

I was born in San Francisco, and when I was 4 months old we moved to Mill Valley, two towns north of the Golden Gate Bridge, nestled at the foot of Mt. Tamalpais. I went to graduate school in New Jersey for a Masters in Public Affairs, but after graduation in 1986 wound up getting a job in the private sector and moved to Brooklyn, where I met my first ex. In 1987 we moved in together in Hoboken, in 1988 we followed his job to White Plains, and after we broke up in 1989 I moved back to the city to Staten Island. So I’ve lived east, west, north, and now south of Manhattan but never in Manhattan. With almost half a million people, I like to call Staten Island the world’s biggest small town.

Some of us may not know that you have a career in politics. Can you give us some of the details? Whom do you work for? What kinds of things are you involved in, and how did you get into this field?

Since 2008 I’ve been the chief of staff to Assemblyman Matthew Titone, a Democrat who represents the north shore of Staten Island. I got involved in politics through gay activism. In 1986 in Brooklyn I got involved with Gay Friends and Neighbors of Brooklyn, and in 1989 I got involved with Lambda Associates of Staten Island. Both are now defunct but back then were lesbian and gay social groups. The “-BTQIA” were still nascent and hadn’t really been added yet, and in fact the big argument among the women of Lambda Associates was whether they called themselves gay women or lesbians. It was easy being out on Staten Island, as I knew almost no one there, and I got appointed as the Staten Island representative to Mayor Dinkins’s Lesbian and Gay Police Council, which was tasked with improving LGBT-police relations. In June 1992 I spoke at a Staten Island school board meeting in favor of the Children of the Rainbow First Grade Curriculum. This curriculum was several hundred pages long but dared to include almost a full page on same sex parents and listed three books (Gloria Goes to Gay Pride, Daddy’s Roommate, and Heather has Two Mommies) among the hundreds of suggested readings. This miniscule inclusion caused a firestorm but also enabled me to meet other progressives on Staten Island and get involved with the Democratic Party. In 1994 I was asked to join the Democratic County Committee of Richmond. I left the private sector in 1995 to join the Staten Island AIDS Task Force (now Community Health Action of Staten Island) to start their LGBT education and outreach program. In 2002 I started working part-time for the Assembly as a constituent liaison, representing the office at community meetings, before becoming chief of staff in 2008. In 2009 I was a co-grand marshal for the Staten Island Pride Parade and Festival

Wow! I had no idea! What an honor! One of the reasons you were picked for spotlighting, among others, is your long and important history and involvement with our water polo team. How long have you been with us? What brought you to our water polo team? What’s it like being on a LGBTQ+ Water Polo team? What makes it fun for you? What have been your most memorable moments? (Sorry to bombard you with all these, but some of us have no experience with playing water polo, and we really are curious!)

Growing up in California, it’s no surprise I started swimming competitively at age 11. My mom told me much later that I had been expressing interest in ballet, so she unobtrusively steered me to swimming, thinking it might butch me up, which it didn’t. Again, it being California, upon entering high school they had all the swimmers play water polo, which is how I got started in that sport. I was a breaststroker with good legs, so they put me in goal. I basically stopped aquatic sports after graduating from high school in 1979 but then read about Team New York in the fall of 1990 and joined the team. Long Beach, CA, in 1991 was my first IGLA. It was the first year that TNYA fielded its own water polo team, and I was on it. I think I am the last of the original water polo players still playing. I’ve played polo in every Gay Games since then and almost all IGLAs (I missed the second Paris, Copenhagen, and Hawaii), even when TNYA didn’t send a water polo team. I played with Manchester in 2010 in Cologne, with DC in 2014 in Cleveland, and again with DC in 2016 in Edmonton. Highlights were winning IGLA gold in 2000 in Paris and again in 2012 in Reykjavik.

The great thing about being on an LGBT water polo team is that it is a place where you don’t have to think or worry about being LGBT, you can just be yourself. We are a co-ed team, and we have a handful of straight women on the team as well as a few straight guys, and they tell me that they enjoy being on the team because it is so accepting. One thing that makes water polo fun is that it is a team sport, and you have more social interaction than swimming by itself provides.

Super! I feel I understand your passion for water polo a lot better now, and I have always enjoyed when we came out to watch your team compete at IGLAs. Aside from your career and water polo, what are some of your other hobbies, interests, etc?

I’ve always loved animals. When I was little, before I got bitten by the political bug, I wanted to be a naturalist. I have visited at least 28 zoos and 4 aquariums, and since 2011 I’ve been a volunteer docent at the Staten Island Zoo. On weekends you might find me there with ET the wood turtle, or staffing a bio-fact table, or providing information about exhibits. I also crochet. One of the ways I’ve channeled my grief after the Trump election is that I’ve crocheted 148 pink pussyhats since January.

I’ll should take up crocheting myself then! Any parting advice you would like to give to someone who might be interesting in playing water polo, on our team or any team?

If you are thinking about trying water polo out, and I highly recommend it, one thing you will need is a basic level of swimming competency, as there is a lot of swimming back and forth, up and down the pool, in a pool where you cannot touch the bottom, at least in tournaments. This is not the jumping-up-and-down-off-the-bottom of pool volleyball or the splashing-up-and-down of inner-tube water polo — it’s exhausting. If you’ve never played a team sport or handled a ball, that’s okay, those are things you can pick up through practice, as we take people with all levels of experience.

Chris, again, thanks so much for being in our Spotlight. Anything else you would like to add, or say to your teammates, or our team in general, or to anyone, in fact, who may come across your spotlight?

I love TNYA. There is a sense of community; you can be yourself. You are accepted, even if you aren’t the greatest swimmer, diver, polo player, or synchro artist. Being on the team is also a great excuse to travel, which gives you a different perspective of a city you visit for a Gay Games or IGLA than you might get going as a tourist.