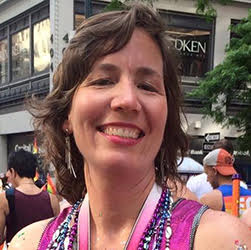 Charlotte is a swimmer and synchronista who joined our team in 2012. Herewith, an interview conducted by Danny Rosemarin.

Hello, Charlotte, and thanks for agreeing to be in the TNYA Spotlight “hot seat.” I met you for the first time at the first Asbury Icebreaker open-water race in June 2015. When was your first “serious” open water race?

Thanks for the opportunity — I”m honored! My first open-water race was in 2011: the famous Grimaldo’s Mile, from Coney Island to Brighton Beach. It was the third time I’d ever gone swimming in the ocean, and I barely knew anyone there. But the sunny skies and gentle green waves were inviting, the current was mild, and even though there were jellyfish under my fingertips, they didn’t sting. I loved the cheering when each swimmer ran in, my final results were respectable, and I even made some new friends at the breakfast afterward, including TNYAs Liz Gately and Melinda Beck. I was ecstatic for at least a week!

How do you feel about open-water swimming, and what recommendations would you make to some of our fellow TNYA’s who are interested in expanding from the confines of our swimming pools to open water?

Swimming in the ocean always replenishes my soul. It’s never boring, because the water and air temperature, wind and waves are always changing. It’s a fun way to get up close and personal with NYC landmarks. I’ll never forget swimming around Liberty Island and seeing the lights coming up in Manhattan, followed by the lady’s torch lighting up the sky, as I turned my head each way to breathe. Beginners might want to try swimming with the Coney Island Brighton Beach Open Water Swimmers (CIBBOWS). They meet on Saturdays and Sundays in the summer, at 10am in Brighton Beach. Lots of TNYAs, including Janet Harris, Hannah Borgeson, Cara McTeer, Richard Peterson, and Pauline Shu, among others, are also CIBBOWS members, and have done open-water marathons and polar-bear swims.

When did you first come to TNYA, and what was the motivating factor for you?

When I heard there was an LGBTQ+ masters team in New York, I had to try it out. That was in 2012. I wanted to see what I might be capable of as a swimmer, because I’m adopted and had recently discovered that my biological father had been a star swimmer and athlete (unfortunately, I never got to meet him). It was thrilling to join such an accomplished team, which includes transgender people, immigrants, people of color, straight men and women, and even heterosexual couples. That’s my ideal of LGBTQ+ liberation — that we create queer spaces where a truly diverse group of people can feel welcome, free to be ourselves and to love whoever we want. We can always do more to make our diverse members feel truly welcome, but I don’t take this team for granted either. I will never forget what it was like to live through the painful ostracism of the LGBTQ+ community during the AIDS epidemic in the ’80s and ’90s, when there were very few safe spaces, and our right to exist and to protect our relationships and our families were under attack every election season, and in between. Actually, it can still feel that way now, although there have been many positive advances.

As many of us know, you have branched out to TNYA synchro swimming and recently participated in IGLA 2017. Many of us were at the exhibition at JJC before the competition and/or saw the synchro team’s impressive work in Miami, live or on video. Congrats to you and the team! What challenges and triumphs does synchro bring for you and your teammates?

Thanks so much for your enthusiasm! The TNYA board and membership have been incredibly supportive of the new synchro team. We’re so lucky to have such an accomplished coach, Shaina Dinsdale, who was on the Canadian national team. Our team spans a 30-year age range, a spectrum of swimming levels, body types, cultural backgrounds, professions, and gender and sexual orientations — yet we are all equally giddy about dancing in the water in pink spangly bathing suits. For me, it was a triumph to discover I can lift a man out of the water. Yet I have never been challenged in so many ways at once: using new muscles, holding my breath, counting to music, and coordinating my movements with other swimmers. Our practices are really fun and open to everyone — please come and try it!

On a more personal note, I was fortunate enough to be at the charming synchro team fundraiser a few months ago, hosted by you and your partner Roz at your beautiful home in Brooklyn. As I often tell my teammate friends, I’m one of the few native New Yorkers I know, born in Brooklyn and raised in the outer boroughs. Are you from NYC, and if not, what brought you here and how do you like living in Brooklyn?

I adore native New Yorkers! My background was pretty different — swimming in outdoor pools in the San Francisco Bay Area and in lakes in the Sierras near Yosemite. I came to the East Coast for college, and got very involved in queer activism at Yale in the late ’80s. After I moved to NYC in 1990, I joined ACT UP and WHAM! Those were the first of many positive models for how lesbians and gay men can work together. I’ve mostly lived in Brooklyn, watching it rise as a 21st-century cultural mecca, but at the same time its cultural fabric has been torn up and rewoven by gentrification — it has been quite a ride.

Lastly, I leave it up to you! Anything you would like to say to your TNYA teammates, synchro or otherwise? Thanks again!

Thanks, Danny — and to everyone else who has gone the extra mile to make TNYA such a strong and vibrant team for the last 27 years. I’m so grateful to the many coaches, friends, and teammates who have encouraged me to keep stretching for new goals. I’m also really looking forward to IGLA 2019 — and to helping make sure that TNYA and LGBTQ+ swimming is recognized for its important role in the ongoing story of queer liberation, as New York City celebrates the 50th anniversary of Stonewall.