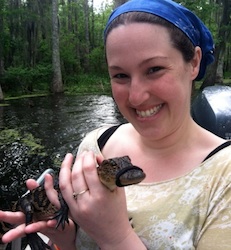 The Board of Directors is delighted to name Bonnie Schwartz as our Teenya of the Month. Bonnie has been swimming with us since 2004. As a valued member of our coaching staff, she has also led countless clinics and workouts and been part of the Swim Camp squad, where she’s either been on deck or in the pool every year since 2003. She did herculean work at Aquapalooza II under extraordinary circumstances, keeping it all going smoothly when technical issues threatened to send the whole thing over the cliff at the last possible moment. And she also provides her fellow coaches with their crucial annual lifeguard certification. (Her classes are great. Need to get CPR training? Talk to Bonnie.) Really, we don’t know what we’d do without her.

It was kind of inevitable, we guess, because Bonnie’s first memory is of getting dunked under the water at a “Mommy and Me” class and screaming bloody murder, and she’s had a life in and around the water ever since. She swam on the varsity swim team at Johns Hopkins University. After she graduated, she gravitated towards open water and became a regular at Brighton Beach and did many of the NYC Swim events; in 2002 she did a solo swim around Manhattan. She also swam across the Potomac River, back from Alcatraz, and in lakes and oceans all over the East and West Coasts. In 2003 and 2004, she was an All-American for the 10K open water distance. In 2005, she became the 756th person to cross the English Channel solo. While at Business School at Columbia in 2006/7, she was an assistant coach for the Columbia Women’s Varsity Swim Team.

Please join us in thanking her for all she does.